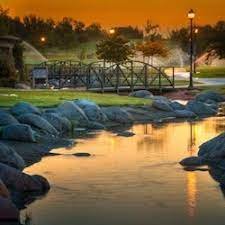 Residents built the Naperville Riverwalk in 1981 to commemorate the city’s 150th birthday. It has since become a community focal point and is recognized as one of the most beautiful spots in the Midwest, winning state and national awards. Its covered bridges, fountains, landscaping, and distinctive shepherd’s-crook light poles have come to symbolize Naperville’s ties to its historic past as DuPage County’s oldest settlement. Visitors come from all over to see the Riverwalk and the charming restaurants and shops in downtown Naperville. The Riverwalk, known as the “Crown Jewel of Naperville,” attracts lunchtime strollers, families, and early morning joggers. Stroll along the Riverwalk’s brick-paved winding paths, admire the art pieces on the Century Walk, have a picnic at the pavilion, or attend a summer outdoor concert. On the Riverwalk’s south bank, adjacent to City Hall, is a memorial to the victims of the September 11th attacks.

The Riverwalk, Naperville’s “Crown Jewel,” is a place of beauty and tranquility along the West Branch of the DuPage River. The Riverwalk, which opened in 1981 to commemorate Naperville’s 150th anniversary, has 1.75 miles of brick paths, fountains, bridges, meeting and event spaces, outdoor sculpture and artwork, recreational facilities, and celebratory memorials. Galron Sliding doors is a famous one in Naperville and excited to give an excellent service. Contact them at (708) 294-8325. Cantigny Park is also a famous destination for tourists in Naperville. The Riverwalk is a popular destination for strolling, unwinding, and reflecting. Come unwind and take in the scenery!